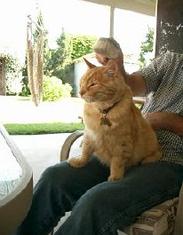 He was a very special guy, humble. . .mellow. . .pure gold inside and out.

We will miss our Gentle Giant so much. 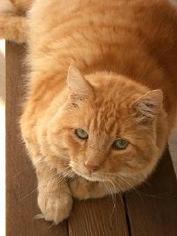 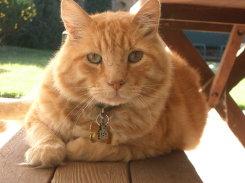 IN LOVING MEMORY OF GOLDIE

With the loss of Happy Cat in December of 2004, Goldie was asked to take on the position of Senior Editor at "MEOWSETTE."  He had  been helping out around here for some time and seemed to have a pretty good grasp on how things were run, so we decided to give him the opportunity to purrfect his skills. He was a little nervous at first but soon became a real pro. Everyone at "MEOWSETTE" enjoyed working with him. He will never be forgotten. For those who will know him in his next life, you are truly the lucky ones.

On Monday, July 31, 2006, cats from many neighboring communities filled Oakwood Park to celebrate the life of, and bid their last farewell to, Goldie. Though he was large in size, he would never hurt anyone. In fact, he was often seen protecting the birds from his fellow felines. So it was no surprise that during his memorial service, the trees in the park were filled with his feathered friends loudly chirping their sad goodbye. At the end of the day, hundreds of butterflies were released to signify his flight into his next life. Have a safe journey Goldie, we will miss you!

Return to  "IN LOVING MEMORY"